LWG Board of Directors:  The LWG Board generally meets every other month to guide the organization, discuss issues, develop workplans and manage finances. Board members are elected by current members at an annual meeting and serve three-year terms. The LWG’s By-Laws call for a minimum of 5 Board members, with balanced representation of conservation, agricultural/ranch and at-large community interests. Board members must reside in the State of Montana and at least one more than one-half of the officers must be residents of the Lolo Creek Watershed or the Lolo community.

Bobbie Bartlette grew up in Missoula, Montana spending weekends hunting, fishing, camping, ghost town exploring, and square dancing with her family. She began her career with the US Forest Service in 1968, working seasonally at the Fire Sciences Laboratory in Missoula while attending the University of Montana. She holds a Bachelor’s degree in Zoology and a Master’s degree in Forestry from the UM. She retired from her work in fire research and teaching fire science in 2007.

Bobbie became involved with the Lolo Watershed Group during an evaluation of streambank erosion lead by the group in 2005-2006. In 2008, severe erosion on a portion of the family’s property on Lolo Creek led Bobbie to work with local Federal agencies regulating streams to create a successful stabilization project. She has been president of the Lolo Watershed Group since November 2008.

Outside of the art and science of fire and water, Bobbie has been involved in square and round dancing since the 1950’s. She and her husband, Barry, operate the Square Dance Center & Campground on Lolo Creek.  Bobbie and Barry have 4 grown children and 2 grandsons. Her hobbies include dancing, playing guitar, painting, fishing, and camping. 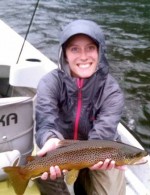 Kascie Herron first met the Lolo Watershed Group while in graduate school at the University of Montana. One of her projects involved working with the LWG to assist creekside landowners experiencing channel migration and erosion challenges. After graduating in 2013 she joined the LWG board and currently assists with grant administration, outreach, and conservation programs. Kascie works for American Rivers on river protection advocacy efforts across western Montana and spends every spare moment she can floating, fishing, hunting or hiking along a river.

Tom migrated to Missoula from the east coast in 1976 and has lived in the upper Bitterroot Valley on Mormon Creek since 1984.  He is generally interested in preservation of the natural character of Montana and the Clark Fork/Bitterroot watershed.  He views the Lolo Watershed as an integral part of this environment and he promotes the protection and improvement of the positive attributes of this resource.

Tom, a retired Computer Scientist, is enthusiastically involved with the raising and training of Australian Shepherd stock dogs.  He maintains a small herd of sheep for training purposes at his place on Mormon Creek.   He enjoys competing with his dogs in local as well as national stock dog trials.

Tom has been on the Lolo Watershed Group advisory board since 2008.  His goal is to maintain the agricultural benefits of the creek, such as livestock water and crop irrigation, while assuring that the health of the watershed is protected and preserved.  He would also like to see the trout habitat of the creek returned to its former status as an excellent fishery.

Tom has worked on the stream flow monitoring projects put in place by LWG and other conservation organizations. He is interested in the history of stream flow and temperature variations and the causes of these fluctuations.  Tom sees the Lolo Watershed Group as a valuable community resource for acquiring and disseminating accurate and useful information about the watershed to area residents.  It is also a valuable focal point for organizing community projects that benefit the watershed.

Michele Landquist first got acquainted with Missoula as a youth during the mid-sixties when her father was stationed at Fort Missoula. Her father was a career military man which meant the family moved around the country/world a lot.  After graduating high school, about ten years later, Michele moved back to Montana to make Missoula her forever home.  Shortly after moving back she met and married her husband, Bruce.   Together they moved to Lolo, raised their two daughters, and established their organic family farm, Bantam Acres.

Michele is no stranger to juggling numerous tasks and has always been involved in the Lolo community.  Throughout her life she has served on numerous local county boards, councils and commissions.  She graduated in 1999 with a Bachelor’s degree in Biology, Natural History Emphasis and a Minor’s degree in Communication from the University of Montana.

Her involvement with the Lolo Watershed Group (LWG) began with its establishment as a steering committee member to form the LWG and evolved into numerous positions from LWG Board of Directors member to a Co-coordinator; ending as Executive Director.  After stepping down to pursue a six year term as county commissioner, Michele has agreed to bring her energy back to the LWG.

Michele has always loved outdoor recreation, hunting, camping, and especially fishing.  She has a strong interest in stewardship activities that will contribute to making the world a better place and believes great things can be achieved by working collaboratively.

**We currently have an opening on the board for our Vice President position. Click here to request more information.

LWG Advisory Board: The LWG Advisory Board reviews and gives input on the organization’s projects, workplans and proposals as needed. Advisory Board members are invited to contribute their expertise as volunteers (not elected), do not serve terms, and need not reside in the Lolo community.